In early 2020, the Fading City exhibition was produced by the Jewellery Quarter Townscape Heritage project and held at the Hive. Inspired by the textures and typography of buildings the exhibition asks us to immerse ourselves in a world that might otherwise pass us by. Artists Tracey Thorne and Jemma Gunning produced new work for the exhibition using various printmaking techniques to draw out the character and soul of the buildings.

Tracey Thorne’s screen-prints were based on her work to document old hand-painted signs known as ‘ghost signs’, a project supported by Arts Council England. The work was made from photographs that explore Birmingham’s disappearing faded advertising signs found on buildings around the Jewellery Quarter. Around 180 hand-painted ghost signs from the late 19th and early 20th century were recorded, helping to document and preserve the craft of signwriting. 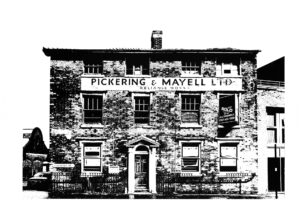 Print of Pickering and Mayall ghost sign by Tracey Thorne

Tracey Thorne has lived in Birmingham since the late 1980s and today splits her time living and working in the UK and Jamaica. She is a photographer and photo artist with a special interest in the ephemeral landscape, found objects and photo activism.

Jemma Gunning is a printmaker based in Bristol. She produced new work for the exhibition commissioned by the Jewellery Quarter Townscape Heritage project. Her practice documents abandoned sites that often contain social and historic significance that are in danger of being lost. Just one or two historic buildings can serve to define a community and for her commission Jemma responded to two abandoned sites, Alabaster and Wilson and Unity works. Using monotypes and etchings she explored the derelict states of the buildings, freezing moments in time and recording our fading heritage. 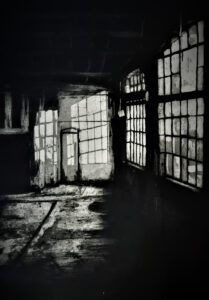 Print of the Unity Works by Jemma Gunning