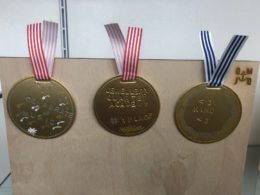 What does your place of work mean to you?  More specifically do you feel part of the fabric of the area? These were some of the questions about hopes and dreams the Quartermasters explored with students from Jewellery Quarter Academy during the Autumn term. This was a partnership project funded by the JQ Townscape Heritage Project and Arts Connect.

During the in-school workshop Tina, Deb and Kirsty worked with a group of year 9 students creating artwork that was displayed at Birmingham Assay Office in December.  Jewellery Quarter Academy takes part in many community projects around the Jewellery Quarter and so the workshops aimed to give students information about the buildings and industry around the Quarter.  The Academy is right next to Dayus Square which is only the second square in Birmingham to be named after a woman (the other being Victoria Square), using Kathleen Dayus as an example of how people in normal walks of life can be admired for their achievements. 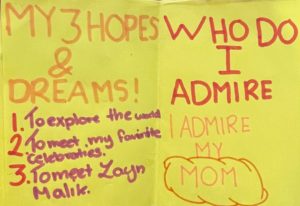 Medal making is still big business in the Jewellery Quarter and Quartermasters took inspiration from the British Art Medal Society and how a medal of achievement can also give a message.  Students created their own medals in the workshop celebrating their hopes and dreams but also who they are now.  The students at the academy are creating the history of tomorrow and we really wanted to capture that. 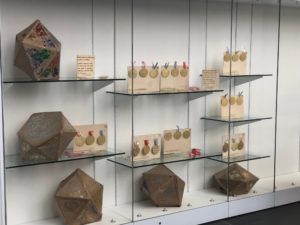 The exhibition at the Assay Office

The full day of craft was completed by students working together to create large scale gems.  As well as running Quartermasters we are all makers and earn our living from our craft.  As a maker you never really work alone at the most basic level you need to have a relationship with the raw material provider to create a product.  In the jewellery industry each piece of jewellery will have passed through many makers hands before it is completed. Engravers, setters, polishers, designers all play their part and so working together as a team to create the gems really did reflect that. 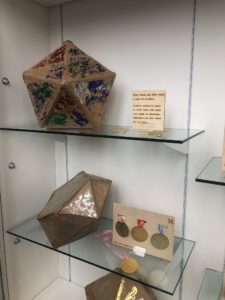 Quartermasters have worked with years 7, 8 and 9 on the extended Spotlight on the Street project in different ways. The aim being to provide craft activities and information about the area, that the students are part of from Monday to Friday each week.  Year 7 received craft kits which were used in form time, the kits included instructions on how to create ghost signs, zines and models.  The information about the area was included in a special edition of Trike Times created by Quartermasters.  Year 8 are working with Quartermasters digitally, they have received tools to create their own handmade book, the instructions have been provided by Birmingham Stationary Co, a small business in the Jewellery Quarter who specialise in hand made stationary.  This is part of the Arts Connect research and design project called “Thrive”, looking at digital access to art in schools.

In such a difficult year it was fantastic to see the students’ willingness to learn about their environment but also see their confidence and willingness to share their hopes and dreams.