The Jewellery Quarter Townscape Heritage (JQTH) project and JQ Cemeteries project partnered with Access to Heritage Art and Culture (ATHAC) and The Hive to run the Heritage Creatives – an online group of volunteers who are interested in making creative content inspired by the Jewellery Quarter.

The group of Birmingham-based artists have worked together in online workshops facilitated by multi-disciplinary artist Thomas Tyrrell. They have created artwork inspired by the Argent Centre, a former pen factory and Turkish baths in the Jewellery Quarter. The building has recently undergone a restoration project, grant aided by the JQTH grants scheme. The project included reinstatement of corner turrets, featuring stainless steel finials in a floral design. Inspired by the history of the Victorian building and the recent works that have taken place, Heritage Creatives produced works on paper and canvas, using dip pens and inks in another reference to the history of their chosen building. 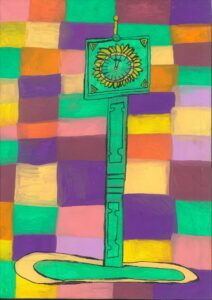 Artwork by the Chamberlain Clock, by Mehar Khan

The Heritage Creatives have also drawn on inspiration from other parts of the Jewellery Quarter, including the Victoria Works, another Victorian pen factory opposite the Argent Centre, and The Chamberlain Clock. The Heritage Creatives went on to create work inspired by individuals who are buried in Warstone Lane and Key Hill cemeteries, and who have made a contribution to the fields of manufacturing and design.