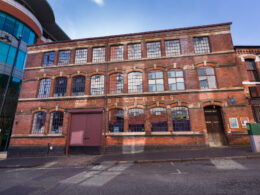 I first went to the Coffin Works, Newman Brothers museum in 2014 for a tour, and to enquire about volunteering as a tour guide. I think it was a Sunday morning in April from what I can remember but memory may not be exact.

Cornellius was our tour guide, and you could just tell he had worked in the industry with the way he was talking about the experience of working in the Jewellery Quarter. 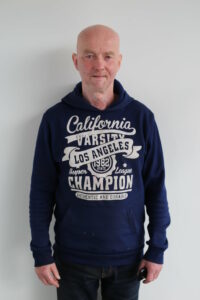 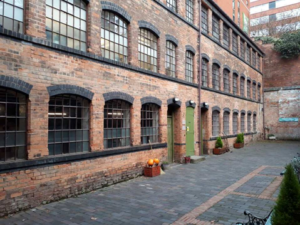 The tour began in the courtyard (pictured above) and continued through the factory. Learning more about the industry in the Jewellery Quarter lit up something in me that made me want to learn more, and in order to do that, I became a volunteer.

Some of the main features of the tour included the chance to handle objects, and to be shown how various parts of the factory worked, such as the drop stamps and fly presses, and it gave a hands-on insight into how coffin furniture was manufactured at Newman Brothers. I found it to be a really ‘homely’ place as well, with a lot of the oral histories from people who had worked there adding even more to the tour. The fact that the staff and volunteers seemed to be like a family also made me very keen to be involved, and I’ve since learned that it is like being part of a family looking after such an inspiring story within the museum.

Before I could become a guide, I had to undertake tour guide training, and write my tour. It took a while to research the factory to see what kind of tour I wanted to undertake. Every tour at Newman Brothers is different as each guide has a different perspective of the history and the lives of those who worked there. As I was studying for a Masters in Museum Studies (which I have since passed), I thought adding something into my tour around the conservation and management of the collection might be interesting, so I have added that as time has gone along and I have gained more knowledge and confidence.

As part of my role, I have also undertaken front of house training, and have been part of many corporate events including weddings, our guide book launch, and theatre events. I felt that it was also a great achievement when we were awarded the Queen’s Award for Voluntary Service, something I’m very proud to be a part of. Getting to know Cornellius as well as the many other volunteers has been really enlightening, and we have all learned a lot from each other. Having many of them as part of the Jewellery Quarter Heritage Squad is great. Everyone has a wealth of knowledge to share, and the Peoples’ Archive is an amazing project showcasing the oral histories of people who have worked, collaborated and volunteered in the Jewellery Quarter over the years, and some still do.

There are many places and spaces within the Jewellery Quarter which are abundant with stories and narratives explaining the lives of the people who have lived and worked here. The oral histories from this archive are definitely worth a read, especially as we are now living through a lockdown!

Step back in time with the Newman Brothers Museum and experience how this old Jewellery Quarter firm once operated, producing some of the world’s finest coffin furniture.