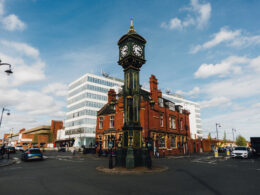 The Grade II listed Chamberlain Clock, situated in the heart of Birmingham’s Jewellery Quarter, is due to undergo major renovation work, as part of the JQDT’s long-term vision of protecting the area’s unique heritage.

Located at the major intersection of Warstone Lane with Vyse Street and Frederick Street, the ‘Chamberlain’ Clock tower was erected to commemorate the visit by Joseph Chamberlain, the Colonial Secretary, to South Africa in 1903.

However, with the clock last being restored in 1989, it now requires work to refurbish it after years of deterioration to the timepiece and exterior of the clock tower.

The Chamberlain Clock, owned by Birmingham City Council, is expected to be removed from site in January 2020, so the works to the beloved landmark can begin. The JQDT plan to have the clock back in-situ for Summer next year.

It’s estimated that the costs of the refurbishment project will approximately total £150,000. Luke Crane, Executive Director of the Jewellery Quarter Development Trust comments “The restoration and refurbishment of the Chamberlain Clock is possible because of the generous contribution of our business community through the JQBID, as well as the funding provided by the Jewellery Quarter Townscape Heritage project, through the National Lottery Heritage Fund.

“In our 2017 renewal proposal to our BID Levy Payers, we included a pledge to refurbish our famous Jewellery Quarter landmark to ensure that it keeps ticking along for our future generations. We’re absolutely delighted that we can finally deliver on this promise”.

The removal, repair and reinstallation will be undertaken by clock specialist Smith of Derby. A clockmakers established in 1856, they have experience of working on major public and architectural clocks including the removal, restoration and re-installation of Little Ben in London.

The repair of the clock tower will include a full repainting. All features previously painted in gold are set to be gilded in 23 ½ carat double thickness English gold leaf. The clock dials will become backlit using LED tubes with the exterior lanterns also lit by modern, heritage style LED bulbs.

The restoration of the Chamberlain Clock is part of a wider focus that the JQDT has on the regeneration of the Jewellery Quarter – modernising standards yet still protecting the area’s unique heritage. Other public realm improvements include the restoration of Key Hill and Warstone Lane cemeteries, the enhancements made to Caroline Street, as well as the continued work by the Jewellery Quarter Townscape Heritage project.