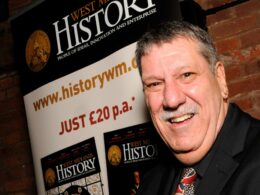 One of the Jewellery Quarter’s hidden treasures has been awarded a grant from the National Lottery Heritage Fund to encourage more people to visit it – and we want you to be involved.

Professor Carl Chinn MBE Ph.D. is a social historian with a national profile, writer, public speaker, and teacher. An off-course bookmaker himself until 1984, he is the son and grandson of illegal bookmakers in Sparkbrook, whilst his mother’s familywere factory workers in Aston. His writings are deeply affected by his family’s working-class background and life in the back-to-backs of Birmingham and he believes passionately that history must be democratised because each and every person has made their mark upon history and has a story to tell. An off-course bookmaker himself until 1984, his grandfather started as an illegal bookie in 1922.

He was the expert on ITV’s ‘The Way We Were’ series and has appeared on numerous Radio 4 programmes, including those presented by Libby Purves and Laurie Taylor, whilst he has presented the series ‘Centre of Our World’, looking at various ethnic minorities in Birmingham, and ‘Manufacturing Matters’ a polemic for manufacturing on ‘The World Tonight’. Most recently Professor Chinn has appeared as a historical expert on the ‘One Show’ discussing the Real Peaky Blinders, on the BBC 2 series ‘The Victorian Slum’ and on ‘Who Do You Think You Are’ as an expert on Birmingham’s history.

At this event, there will also be a short tour, books sale and refreshments.

The workshops of the JW Evans Silver Factory are crammed with intricate tools and presses, preserved as though the workers have just clocked off for the day. It’s a rare survivor from an era when master craftsmen at small specialist family firms produced a vast amount of fine jewellery, silverware and metalwork. At one time, 70,000 people were employed in the trade in Birmingham, and the city was known as ‘the workshop of the world’.

The factory closed in 2008 and English Heritage has cared for the factory since 2010. Now, with help from the National Lottery Heritage Fund, we’re exploring how we can open it up to more people than ever before. Through the evening, James will tell us about the key involvements of the JQ and the wider area of Birmingham and its contribution to the way we use and enjoy photography, at the touch of a button.

Please note, we are offering these free events as part of an exciting feasibility study for JW Evans, funded by the National Lottery Heritage Fund. Thanks to this funding, we can carry out extensive and wide-reaching consultation and a comprehensive feasibility study to explore the variety of ways in which this important site of industrial heritage could be both enjoyed by a wider range of people and also used to benefit the local community. We will be evaluating the events we are providing, and as such attendees will be photographed, filmed and asked to help us evaluate the event they have attended. Booking onto this event confirms you are happy for this to happen, and you understand that the nature of this factory site means uneven floor surfaces and unregulated temperatures.