In the early nineteenth century, the land north of Warstone Lane was mainly fields and small rented gardens.  Even south of Warstone Lane, the streets were not complete and recognisable as they are now.  Vittoria Street at one point identified as Martin Street.

60 – 64 Vittoria Street is an early jewellery quarter works with five bays which front onto Vittoria Street and 3 bays on to Regent Street.  The building was extended by 8 bays in a wing of similar style in 1881, the architect was Douglas J Williams.

The building was occupied by a range of different trades people over time. One of the early occupants was John Smith, a travelling linen draper. It also hosted those working in the jewellery trade; George Lowe was an engraver based there from 1872 and in 1888 Potter & Carter moved in – lapidaries who polished and engraved gems. Edward Skinner & Co who were hardware merchants were based at 64 from 1874 – 1876, and another merchant Leopold Cohen moved in shortly after in 1880.

In 2013 – 2017 the Vittoria Chinese Restaurant existed on the site, but building is currently vacant.

No record in trade directory 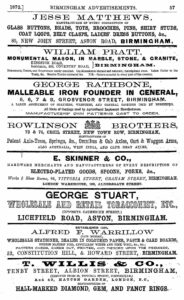 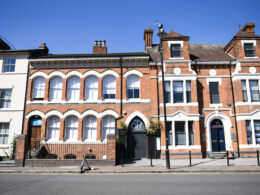 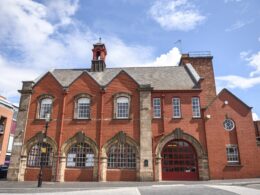