Richard O’Brien is the Birmingham Poet Laureate 2018 – 2020. We commissioned Richard to create three poems inspired by the buildings in the JQ Townscape Heritage area, and in response to the 2019 exhibition ‘Still: Stories from the Jewellery Quarter’. 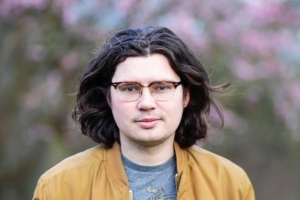 This event was held in January 2020, a week of activities which highlighted the heritage of Frederick Street in the Jewellery Quarter. Richard wrote the poem ‘Vittoria Restuarant, 1976’ about 43 Frederick Street, and it was displayed outside the building for the duration of the week.

In 1950, the building at 43 Frederick Street — now Bullion Store — opened as the Vittoria Restaurant.  Operated by the Birmingham Catering Department, it served the staff of factories based in the Jewellery Quarter, many of whom used it daily. It was also used for events such as rallies, dinners and dances and had a banqueting suite. In 1977, the leasehold for the restaurant was advertised for sale. 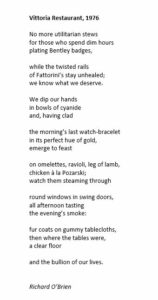 Find out more about the history of 43 Frederick Street

Alabaster & Wilson were family jewellers established in 1887, who created bespoke pieces for customers around the world. The last directors of the company were brother and sister, Stephen and Wendy Alabaster. Rod Mossop was a former employee of the company, a master brooch maker who had been with them since he was 16. Alabaster & Wilson closed down in 2018.

Links in a Chain 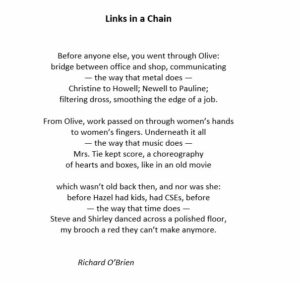 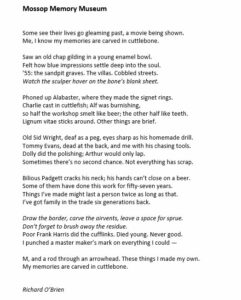 Explore the People's Archive - a collection oral history interviews and portraits of those who have worked in the Jewellery Quarter.

Try creating your own poem about a familiar place, using this exercise by Richard.

Send us your poem

We'd love to read it!