No. 9 Regent Place, was added as an extension to the Canada Works (now known as Standard Works) in the 1880s, and conserved with a JQTH grant in 2021. Distinct from the rest of the building for its slightly plainer facade, some of the visual impact of the brick, stone and stucco render has been lost due to being painted over. Grade II listed, its innovative construction, using rolled wrought iron beams in the basement, was intended to be fireproof. Perhaps this was effective as the building suffered at least two fires in 1889 and 1891 and the structure remained intact. The beams were originally painted with oil and lime wash to preserve them. A 1999 report by English Heritage described its technological significance: “The combined use of rolled-iron and cast-iron beams in the same structural frame is of considerable interest, representing a transition in the development and application of structural ironwork.”

The building is also significant as it contains the only surviving section of rear shopping from the Canada Works.

Some urgent repair works were required to the roof, brickwork, rainwater goods and windows in order to safeguard the building until  the next phase of the proposed restoration can be undertaken by owners Ruskin Mill Trust. 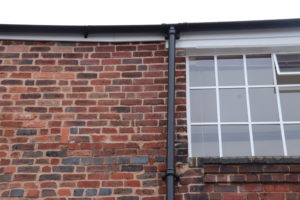